So far, I have not yet really delved into the area of security, my home setup was predominantly heating, lighting and a half finished garden irrigation project. 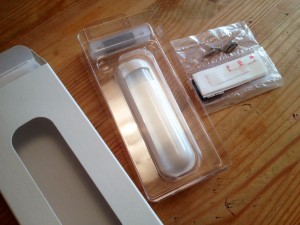 I purchased the Philio PSM02 4-in-1 sensor because, for such a small and reasonably priced gizmo, it seemed to pack in quite a number of features. The PSM02 is Z-Wave compatible and, as the name suggests, has a PIR motion sensor, door proximity sensor, light sensor and temperature sensor. It also includes anti-tamper detection sensors.

Rather than security, my initial idea for the PSM02 is as a way of controlling my heating and lighting. I am fascinated by the way that the Nest learning thermostat uses a couple of in-built motion sensors to detect and learn the habits of its residents and control the heating based on whether it believes people are in or not. I wanted to see if I could recreate this, if only to a lesser degree, using the Philio PSM02 and hooking it into my existing HVAC currently controlled by a Secure HRT4-ZW boiler control. 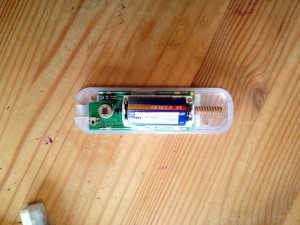 The PSM02 is not much longer than an adult’s thumb, plain white and simple in shape, but not unpleasing in appearance. It also has a small magnet which is attached to the adjoining door or window frame. Removal of the cover is done by levering a small plastic catch, inside can be found a circuit board hosting the PIR motion sensor, tamper switch and Z-Wave chips as well as the battery and a stubby coil antenna.

Connecting the PSM02 to my home Z-Wave network was fairly painless, after putting my Vera controller into include mode all I had to do is pull a little plastic tag out of the back of the PSM02 which releases the battery launching the device into discovery mode, within seconds the Vera found and added the new device without a problem. As an alternatively you can also put the sensor into discovery mode by pressing one of the two the anti-tamper button 3 times. 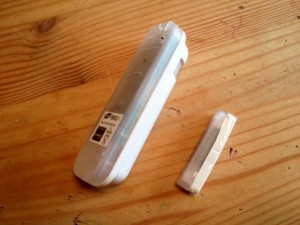 Once associated with the Vera three new devices appear… the main parent device; a motion sensor, and two child devices; a temperature sensor and light sensor. “Three device?” I hear you question, “isn’t it meant to be four?”, apparently there is a known bug with the Vera which means it sees the Proximity door sensor and PIR Motion sensors as a single device, this also means it is unable to differentiate between which of them is being triggered. It is hoped that newer releases of Vera firmware may fix this bug, more information on this can be found on the Vesternet website. Although a little annoying this does not stop me using the PSM02 for what I intended it for, however I do hope that one day they do fix this as I may someday like to be able to tell the difference between someone opening my front door and someone walking down my hall. 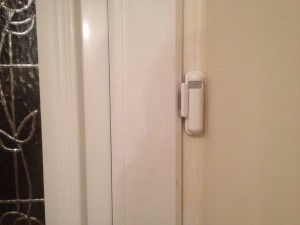 I chose to position the sensor beside my front door which conveniently looks down my hall. The hall is the main thoroughfare between our living room, dining room and kitchen and so received quite a bit of traffic. Before committing the sensors to my door frame with screws, there are two things which help to decide whether the best position has been chosen… In the box was provided a set of small sticky pads which can be used to try out different positions. The sensor can also be put into ‘setup mode’ by allowing the tamper switch to be left out, in this mode an LED illuminates each time the door or motion sensor is triggered, this again helps gauge whether the best position has been chosen. In ‘normal mode’ the LED does not light up.

It did not take me long to set up a basic couple of automation scenes on my Vera which turn my heating up when it detects people in the house and down again after a hour of no motion (assuming someone walks though the hall at least once a hour this all works fine). We prefer to turn the heating down at night so having no motion in our hall at night suits this current scene well. This of course is a million miles away from the advanced intelligence of the Nest thermostat but it is a start, I next intend to try and write some more advanced what/if/else code using the Vera’s Luup programming language.

Thus far I have only really made use of the motion and door sensors in the PSM02, I have yet to investigate the potential of the temperature and light sensors. I think if I were to configure my Vera to take into account the temperature sensor reading to control my heating this may prove inefficient, as its position in the hallway means it is susceptible to fluctuations in temperature caused by the regular opening and closing of our front door which may resulting in lower than normal temperatures readings. I may be able to use the light sensor to detect the difference between daytime, evening and night and change the heating set point accordingly.

Aside from the issue with the Vera not being able to distinguish between motion and door opening I have no gripes about the Philio PSN02, for such a reasonable price this small device holds a number of potential possibilities.

Lastly, I have not even mentioned the primary function for which the PSN02 was designed for… Security! The easy addition of this small device combined with a simple text message alert notification configured on my Vera controller adds a simple but effective level of security which could alerting me while I am away if there is any motion in the house.

As part of the same family Philio also manufacture a pair of slightly cheaper 3-in-1 sensors: