As well as Home Automation one of my other hobbies is graphic design, along with a secret joy in life of spotting when organisations change their logos and branding (sad I know!). 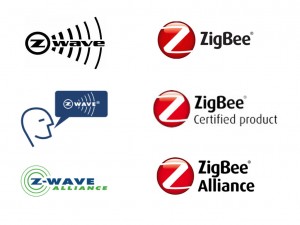 When comparing the branding of Zigbee and Z-Wave I always thought of the Z-Wave branding as clunky and dated. The “Speaks Z-Wave” plain logo looked dull and over complicated in comparison to the bright red, curvy flashy Zigbee logo. I know this should have no bearing on the technology itself, however I do think branding it is an important part of consumer products. Taking other similar technologies; USB, WiFi, Bluetooth, they all have universally recognisable logos, people look for these logos when choosing products, these same logos are also used as ‘badges’ on packaging to further entice the consumer, I do not think the ‘man and speech bubble’ leant itself to this purpose. 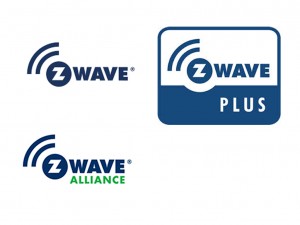 Well, it would seem the people at Z-Wave have been working behind the scenes and have given themselves a new coat of paint. The Z-Wave website has had a complete overhaul and they have re-designed their logo. The new logo is not a million miles from the original one, however it has been simplified and made a little bolder. The arc radio waves have been moved from right to left and the (Z) circle colours have been inverted. I do prefer the new logo which I now think looks more ‘sturdy’ (this is the best word I can think to describe it) and more on a par (from a design perspective) with the Zigbee logo. Some thought has obviously been taken to ensure the logo is still similar to the old one to ensure people still understand they remain compatible with each other.

The above is of course my personal view and design is a mater of opinion so others may disagree!