I have already written a post about my experience getting a water meter installed and my aim to electronically read the stats from the meter. I was fortunate to have been given the opportunity to test the Z-Wave SWM301 water meter RF module from Secure to see if it would suit this aim, as you will read this was unfortunately was not the case. 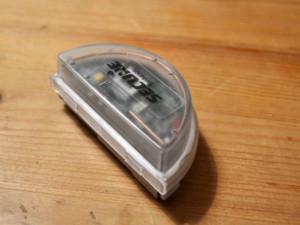 The module itself was surprisingly small but looked well constructed in an IP54 (waterproof) housing. With no physical buttons the SWM301 is initiated by placing a magnet on the side of the module which has a reed-switch placed within, a small red LED indicates the status of the device. There is also an antenna visibly arching around the inside of the clear front. According to the technical specifications the battery can last up to 10 years (depending on the reporting / wake up interval set).

To Include the SWM 301 onto a network follow below process. Put the Controller in Include mode, and then hold a magnet on the side of the RF module next to the reed switch for around 3 seconds. LED will turn on to indicate 2 seconds are over since magnet is placed, LED will remain on for next 4 seconds and then after it will flash once to indicate a NIF action is initiated, water meter will then send NIF. The controller will show when the two units have been successfully linked. 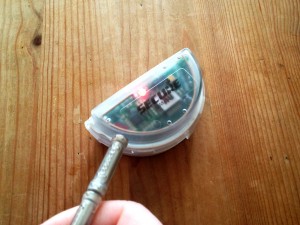 …although the above instructions appear to be simple enough I certainly did not find it easy! After many an attempt and an email to the Secure support team, I eventually figured out that after 3 seconds and the instant the LED lights up you must quickly remove the magnet from the side. If you leave the magnet on too long it fails to go into inclusion mode and goes to sleep again, you then have to wait a couple of minutes to make another attempt. The Secure support team was very helpful and they did admit that the water meter module is a ‘bit sensitive on the timing’, but their advice did contradict my experience:

The water meter module is a bit sensitive on the timing. The time from when the magnet is placed until the led turns on varies a bit. Sometimes it’s a second sometimes a little longer. When the LED is turned on you should wait 4 sec before removing the magnet after that the led should blink 2 times and after a little while It will blink 3 more times.

Eventually associated, the SWM301 appeared as a Water Meter in the devices section on my Vera, I also found I had to install the MiOS Update Utility Plugin to ensure my Vera had the latest drivers. Unsurprisingly, without being connected to a meter, the unit reported no stats. 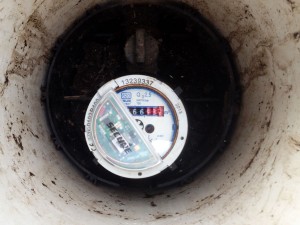 Braving the current British weather I ventured out into the wind and rain to connect the module to my Sensus 620c water meter (which is the standard installation our area by this region’s water company). Alarm bells instantly rang when I noticed there was no method, bracket or fitting to be able to secure the SWM301 to the Sensus 620c. Although its shape did appear to fit perfectly on the face of the water meter it was literally just balancing on its surface easily to be knocked off (or worse stolen!). Following another email to the Secure support team I was advised it will only work with the Sensus Residia Jet and Jet-C water meters which are designed to carry add-on communication devices like the SWM301. 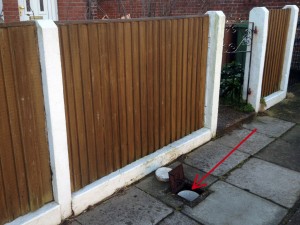 While I had it placed in the pit outside my house I thought I would see if it could at least still communicate with the Vera controller inside my house, being some distance away and beneath a thick metal pavement cover, things did not look good! The Vera failed to be able to poll the SWM301 and further updates stopped. My water meter is located in a pit in the pavement outside the front of my house, approximately 4 meters from the front door and then another 4 meters to my under stairs cupboard where the Vera is located. I even tried installing a Z-Wave socket device near my front door to see if I could use it as a mesh neighbour to increase the range but to no avail. Aside from the distance, I think the main problem may be that of the thick cast iron lid which sits over the pit stopping any radio waves from even contemplating an escape out of the pit.

Sadly, without getting a Sensus Residia water meter installed in my house, the SWM301 does not fit my aim, however for those lucky enough to have the appropriate meter the SWM301 could be an extremely interesting device, this module is available to buy from Vesternet who also sell a wide range of other Z-Wave and Zigbee sensors and devices.