After quite a bit of pestering and waiting I eventually managed to persuade British Gas to swap out my archaic Electricity and Gas meters for the latest ‘Phase 3’ Smart Meters.

This certainly was not an easy process and, despite constant bombardment of TV adverts on television from British Gas about how smart meters are the latest and greatest thing, you would not believe the hoops I had to jump through to get them installed, and, even after finally getting agreement from British Gas, it then took a number of months to get an installation date. This was followed by another wait between the Electricity and Gas meters due to a problem following the install of the Electricity Meter, there was an “issue with communication with the Head End”, which meant the engineer was forced to abort progressing with the install of the Gas Meter and the remainder of the work had to be rescheduled to a later date… 4 months later! Leaving me for a while with one Smart (Electricity) Meter and one Dumb (Gas) Meter, (this was not an issue for the supply of either utility but it just grated against my OCD / geeky / impatient nature).

To be fair to British Gas I think their initial reluctance to install Smart Meters was partly caused by a temporary stall to the UK Smart Meter roll-out programme [1] imposed partly by the Government changing their mind on the specifications for Smart Meters (or possibly British Gas, in an effort to be ahead of the game, had started rolling out Smart Meters too early [2] before the specifications had been fully finalised by UK Government?). I was also demanding British Gas install the latest ‘Phase 3’ smart meters which, as I understand it, are still really in teething stage, so, although frustrating at the time, I do have to forgive them the delays. I also can not fault their friendly staff putting up with my constant pestering!

Anyhow, a number of months later I am now here with a shiny new pair of meters! The ‘Phase 3’ smart meter setup comprises of 4 components: 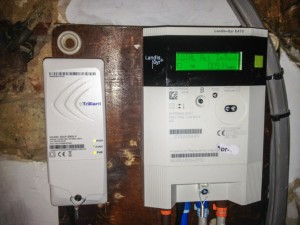 According to the Landis+Gyr website the E470 is aligned to the UK Smart Metering Equipment Technical Specifications (SMETS). Of particular interest to me is its support for ZigBee Smart Energy Profile (SEP 1.1), it was my hope that I could buy a ZigBee gateway or USB receiver and I would then be able to start monitoring and logging my electricity usage on a computer. I later found out this was not going to be as easy as I thought.

Another feature the meter does have is a flashing LED which pulses a 1000 times for every kWh (or once for every Wh). This does allow me to hook a light sensor up to it to count pulses and therefore calculate Electricity usage but this, to me, seems a bit backwards when I have the state of the art Smart Meter with ZigBee!

The E470 supports both Import and Export electricity usage, so one day in the future I may be able to hook up some Solar PV Panels to it.

More information about the E470 can be found here: http://www.landisgyr.co.uk/product/landisgyr-e470-zigbee-smart-electricity-meter/ 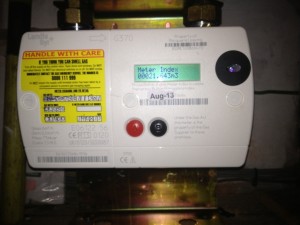 There is no flashing LED (I assume because it is running on a battery not connected to any electricity power supply and therefore an LED would over time drain its battery).

The G370 and E470 do both have an optical probe (IEC1107) interfaces. A round circle about an inch in diameter with a UV LED and light sensor in the center, I am not an expert but I believe these interfaces are serial ports which use light to exchange information and with the right monitoring equipment can be used to access the smart meters and their data. I think their design is such that these interfaces are non-contact in that no electrical contact is made between the meters and the monitoring device (i.e it is via light) making them safe for Gas [3].

More information about the G370 can be found on the Landis+Gyr website. 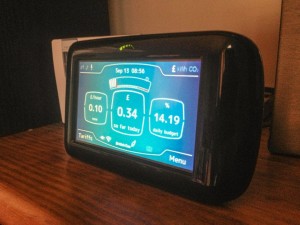 The P450 IHD, which appears to have been re-skinned with British Gas branding communicates with both the Electricity and Gas Meters and displays current Energy usage for both fuels as well as historic usage. The figures can be toggles between kWh, £s and CO2 values. The IHD can apparently also be used by British Gas to send me messages (there is a little Mail Envelope Icon) but as of yet I have not seen any messaged other than the initial “Welcome to Smart Metering” message.

Design wise the P450 is a quite pleasing shape and size, black with curved corners. However I am not so enamored with the responsiveness of the screen and its menus. You have to prod the screen quite hard or use a sharp object as a stylus to get it to respond, reminiscent of first generation Smart Phones, in this day and age of iPhones and super sensitive touch screens it is, at times, difficult to use. I can’t really grumble as it is better than what I had with the dumb meters but I am not sure how the older generation will get on with it if even I struggle.

On the back on the unit is a badge saying “ZigBee Certified Product” again giving me hope that ZigBee is becoming more mainstream.

There is also a Mini USB port on the back which is used to power the device (supplied with a 240V to USB power supply). I am curious what would happen if I plug the P450 into my computer? Would I be able to access it via USB? Or is this something which Landis+Gyr may later be able to enable?

More information about the P450 can be found on the Landis+Gyr website.

A user guide can also be found on the British Gas website.

Tying the above 3 units together is the Trilliant Hub, acting as a ZigBee coordinator, the hub gathers meter reading (and other information?) from both the Gas and Electricity meters and transmits them to the British Gas mother ship (Head End?) via the mobile phone network (the installation engineer said it contained up to 4 mobile SIM cards, one for each of the 4 main UK mobile providers but I am not 100% sure this is true as I thought British Gas only used Vodafone [4]).

The hub certainly looks busy with 3 little flashing LEDs constantly flickering away. I think British Gas can also push updates and settings, messages and firmware updates downstream towards the meters and IHD via the Trilliant hub as well as initiating remote shut off of energy supply to the homes (where people do not pay their bills!).

More information about the SEAP-2000-V can be found on the Trilliant website.

I am not seeing a massive benefit yet to having smart meters yet, other than no-longer having to manually send meter readings to British Gas and a funky In Home Display in my dining room giving me real-time usage. But over time I hope that more features and benefits may be unveiled.

What I really do not understand is the likes of stopsmartmeters.org.uk claiming that utility companies (and the Government) are going to start using smart meters to spy on us and, even more extreme, that smart meters are frying our brains with radio waves, but I appreciate everyone has a right to their own opinion! I am a data geek and love stats, I am therefore happy to have a digital device monitor my energy usage… as long as I am permitted access to said data!

If you found this post of interest you may also like to read the blog of Jason Slater who has also written up a post on his experience getting smart meters installed.